If you are new to this Mod i highly recommend to read the top section as it does contain a lot of useful information.

Create your own unique hybrids consisting of multiple dinos!
This Mod comes with a complete genetics system and 10 hybrids (more will be added over time).
Most of the hybrids are available in 3 variations: Standard, Aberrant & Extinction, some are available in a Colorful variant, too.
Unlike most mods, that add new dinos with new abilities, this mod is meant to be perfectly balanced for vanilla pve & pvp!
Hybrids cannot be bred or cloned and will always be female.
The aim of this Mod is to enhance the lategame and give people more practical uses for endgame ressources!
If you feel like you should be able to create your first hybrids earlier in the game, you are free to overwrite the levelrequirement for the workbenches, that are needed to start!
Part of this mod is a chemical system that is a key element in creating hybrids.
This chemical system comes with a lot of potential, which will come to use in the near future.

There are already Items/Gear available, more will come (If you dont like this you can easily disable it via Ini-Setting)

Through chemistry and a lot of ressources you are also able to summon a wild reaper or phoenix on any map and tame it afterwards! This gives all players that dont have Scorched Earth or Aberration a chance to tame these rare creatures. Maybe you will need them for your next hybrid? 🙂

Additionally planned features:
– integrated tutorial and UI
– research system. Future hybrids may be even harder to create! Some might need excessive research before you can actually create the needed dna!
– while hybrids will have 0 Chance to Mutate through normal means. You will be able to refine DNA and possibly create mutations of said hybrids. These hybrids will not only be slightly stronger, they will have a different appearance and optical differences.
– many more hybrids are planned! Not only flyers or land dinos also underwater hybrids.
– in the future some hybrids are planned to be locked behind an own boss that must be summoned and defeated!
– the integrated chemical system will offer additional Gear, Weapons and Ammo. All of these will have their pros and cons and be balanced for a nice pvp environment while also offering uses for pve players.
This Mod comes with very few engrams and only a few core structures. The rest of the sience will be done by you!

This Workbench is used to extract dino DNA and grant you the ability to create completly new ones! (Unlocked at Level 100) 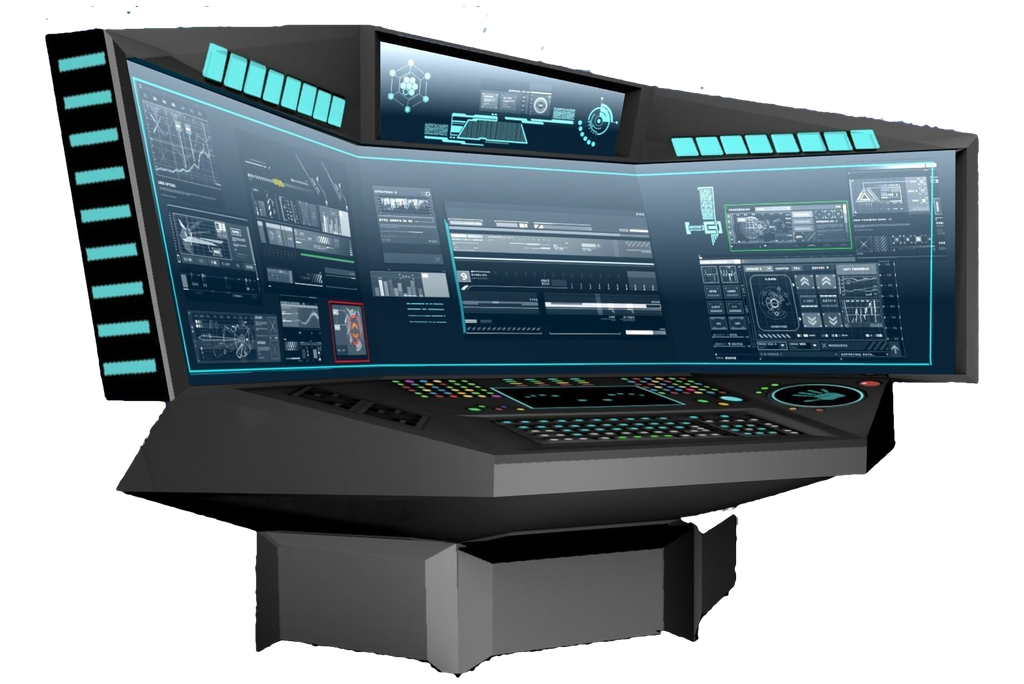 Workbench, that is needed to create the saddles for your hybrids. Thats not all though!
Through the advanced materials you created in the Advanced Chemistry Bench you are able to slightly increase the movementspeed and manoeuvrability of your vanilla flyers, while this will make your flyers faster, it is very very costly!
This will also cover your Griffins & Wyverns! Simply put the “saddle” in its costume slot!
But Revy, “I want to use my awesome Skin on my Wyvern!” – No problem I got you covered! Simply press E on the Wyvern/Griffin Stone once and it will convert into a Stone that can be skinned (This is reverseable of course)
(If you dont like this you can easily disable it via Ini-Setting)

This specialized Chemistry Bench is used to create all those chemicals and detergents, that you need to start in DNA extraction and DNA recombination. This Bench will also open up material reprocessing like the creation of carbonfiber. (Unlocked at Level 80)

So how do you create a hybrid?

To create the DNA for a Hybrid you need the base DNA of the dinos it’s based on. This Base DNA can be acquired by processing a dinos blood in the Genetic Workbench.
To acquire the Extracted Dino blood you have to create a brew which is specific for every dino in the Advanced Chemistry Bench.
The needed Sulfurdioxide which is a key-component in every Extraction-Detergent is a byproduct when oxizing wood to coal with sulfuric acid. (Advanced Chemistry Bench)

This brew can only be fed to the specific dino its made for! Careful, your dino will not survive this. However, it is the only way to acquire the Blood you need to produce the needed DNA.
The blood will be in the dinos inventory uppon feeding the Extraction-Detergent. Please note that blood needs to processed fast as it will decay if not reprocessed to Extracted DNA!

This DNA can be crafted with the other needed Items and DNAs to produce your hybrid’s DNA. Afterwards, you will only have to create the hybrid-egg.
All needed Materials can be produced in the Advanced Chemistry Bench (if they are not vanilla items). Such as the artificial Egg which is needed to sustain the Embrio you are about to create until it is ready to hatch!
Some Hybrids will require Corrupted Element, this can be aquired when fueling the Genetic Workbench with Element instead of Propellant to run.

Exception – Superhybrids: These have a multiplier.
While their Level will also be between 175 and 240 (if default setting), your average Dino Level needs to be 280 to actually reach a Superhybrid that hatches on level 240.

Take a Kitsune and improve it further, combine it with the strenght of a Dragon and
equip it with the power of fire!
The Kurashi can heavily increase its core-temperature and enflame himself.
While enflamed, this Superhybrid lights everything around him on fire, the fire is percentage based, so its very effective against enemies with an high HP-pool.
This Enflaming costs loads of power, a Kurashi that uses this ability will build up topor rapidly, while loosing stamina. However, while enflamed he gets a huge healingboost, that make this ability very strong.

Babies are very lively and will not simply follow you, be careful to not loose them when they start jumping around. Its advised to raise this Dino in a closed room!

Attacks:
Left Mousebutton: Melee (Doesn’t work underwater)
Right Mousebutton: Emflame! (Damages the Area around you consistently, Dinos will stop burning after 5 Seconds if you are to far away.
You will constantly heal over the time you are enflamed, while building up topor and loosing stamina! (Cannot be used underwater)
C-Button: Melee (Works underwater)
Specials: Press “X” to Switch between Speed and Precision 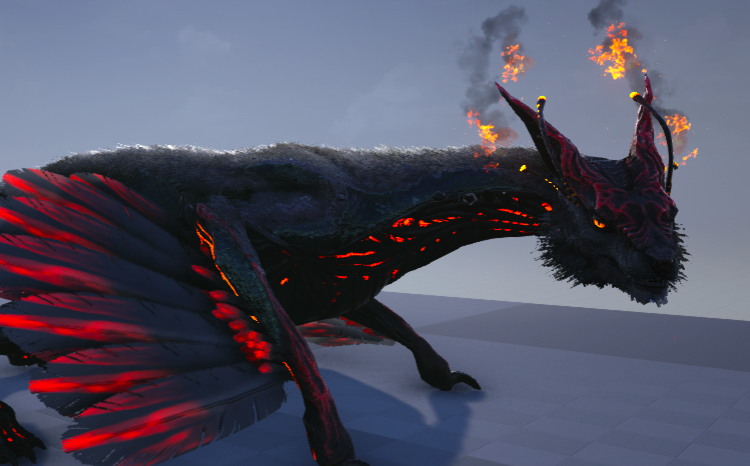 Born out of the flames of a phoenix, hatches a creature that looks like an Ankylo from afar. But hold on, thats not an Ankylo, thats a super Hybrid! This is a creature that is based on another hybrid an is further refined! He posses some strong abilities that make it worth the while! He is way stronger than a normaly ankylo, he can gather tons of metal and even melt it into ingots. He posses some beefy attack that can light your enemies up on fire!

Attacks:
Left Mousebutton: Bite
Right Mousebutton: Tail Attack (Deals Additional Damage to enemies by setting them on fire)
C-Button: Nothing
Specials: Melts 3 Metal into 2 Ingots, Can be skilled in Crafting Speed to increase the processing of Metal, Reduces the weight of Metal & Metal Ingots 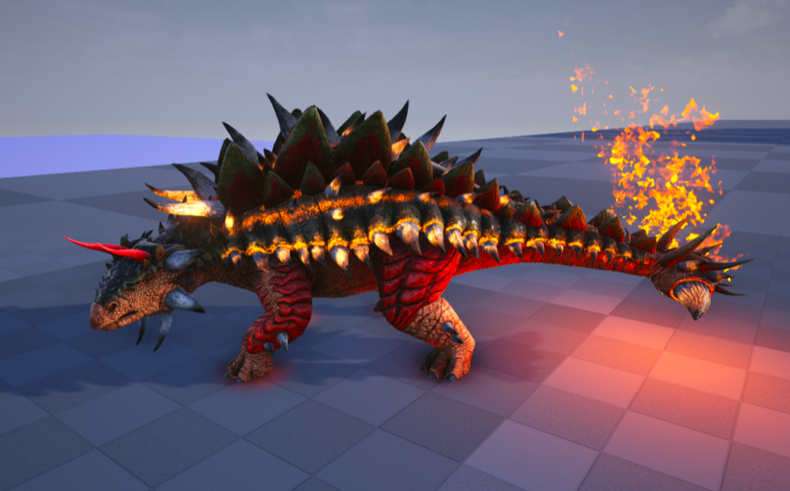 The Kitsune is a hybrid between Managarmr and Rockdrake, as well as elements of the Snowowl and the Electrophorus. He is taller and stronger than the original Managarmr. He can make very wide jumps without losing too much stamina. His lightning attack is a powerful weapon that provides the Kitsune with new life force and weakens his opponents. He is the perfect all-rounder, whether on land, in the air or in the water!

Babies are very lively and will not simply follow you, be careful to not loose them when they start jumping around. Its advised to raise this Dino in a closed room! 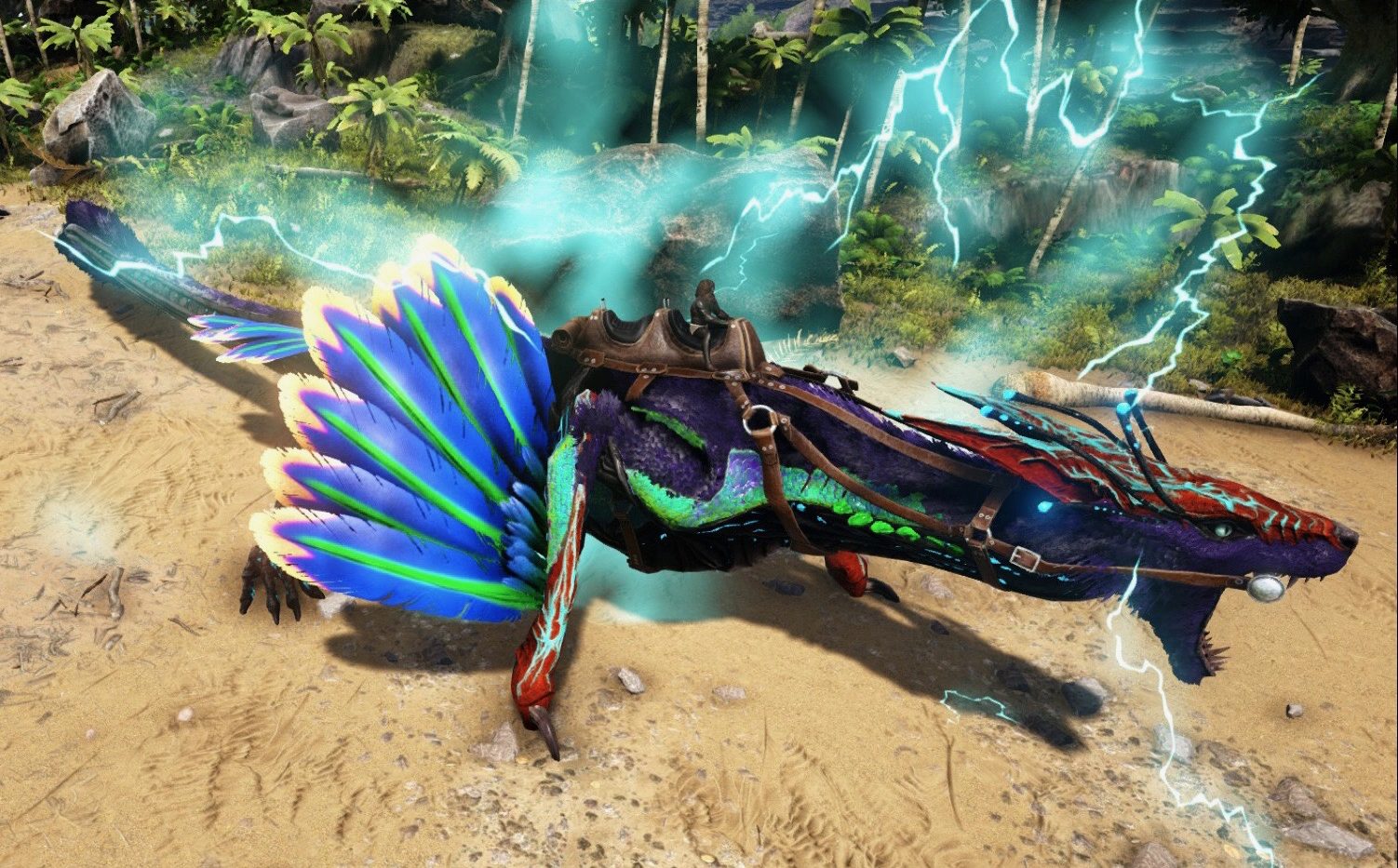 The Sanagi is quite a special lifeform, stuck somewhere between larva and butterfly. His wings, combined with the ability to suck in air and push it out of special membranes, enable him to make very longer and high jumps that almost seem like flying. Due to his stature he doesn’t take falldamage. A special Enzyme that can only be found in the Sanagi, is the reason it poops fertilizer instead of dung, that can be used in crop plots. 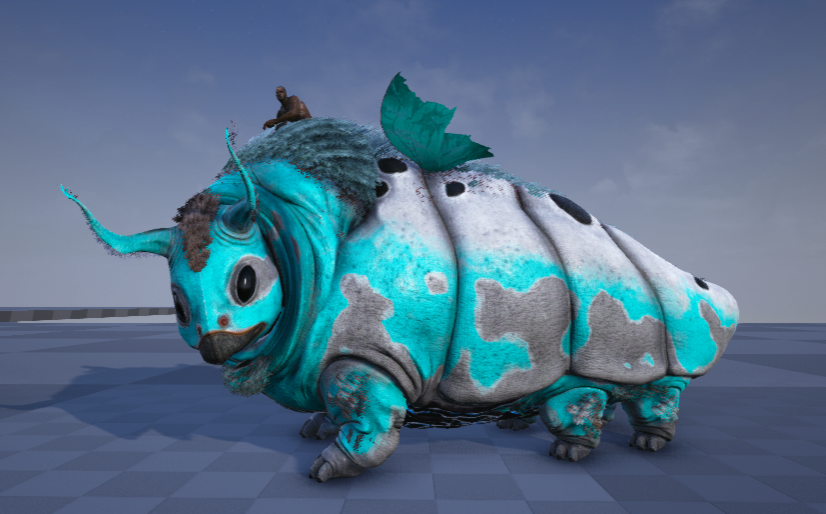 The Spinoraptor is a hybrid between a Spino and a Raptor. Since the DNA appears to be instable the holes must be fixed with two other DNA strands. This leads to some strange abilities, while the hybrid is equally fast as a raptor and does inherit the strength and the water affinity of the Spino, you will also receive an insulation buff while riding and will be supplied with oxygen while diving. However, the dino itself will still need to breathe and recover stamina!

Attacks:
Left Mousebutton: Bite / Melee
Right Mousebutton: Pack Roar (This only works in a Pack and only if you are riding the Alpha!) Boost the Melee of every Pack-Member
C-Button: Nothing
Specials: Provides Insulation and Oxygen underwater, still needs to breathe itself though! 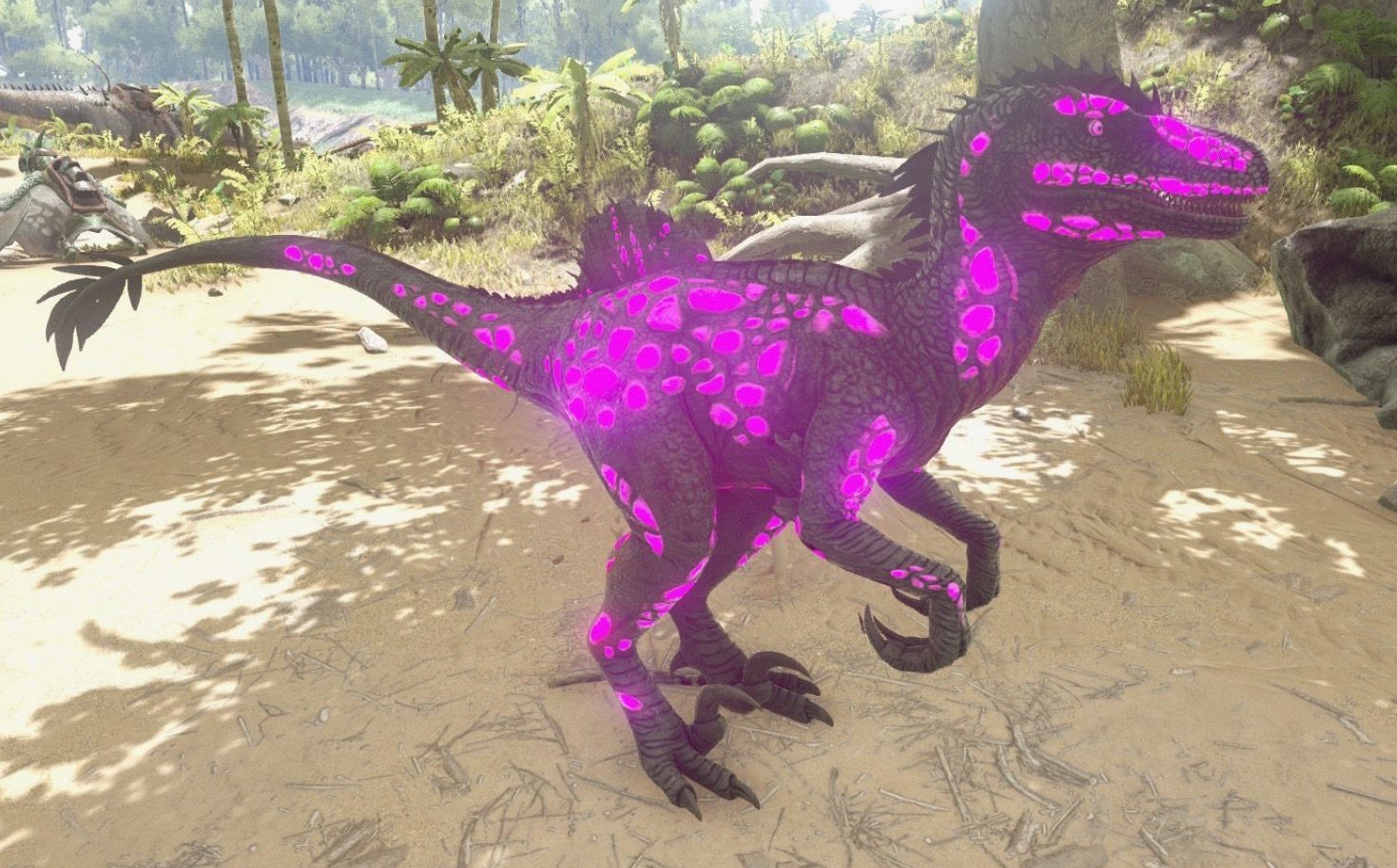 As the name suggests, this is a hybrid between Carno and Raptor. The combination of the Raptor DNA, which makes the most of the speed, and the Carno DNA, whereby the strength is significantly increased, it is possible to throw even larger animals to the ground and overwhelm them. Since the two DNA match each other perfectly, no element is needed for the connection.

Attacks:
Left Mousebutton: Melee
Right Mousebutton: Pounce (Works and most creatures that weight less than 100. Also works on Sabertooths and Direwolves)
C-Button: Nothing
Specials: Nothing 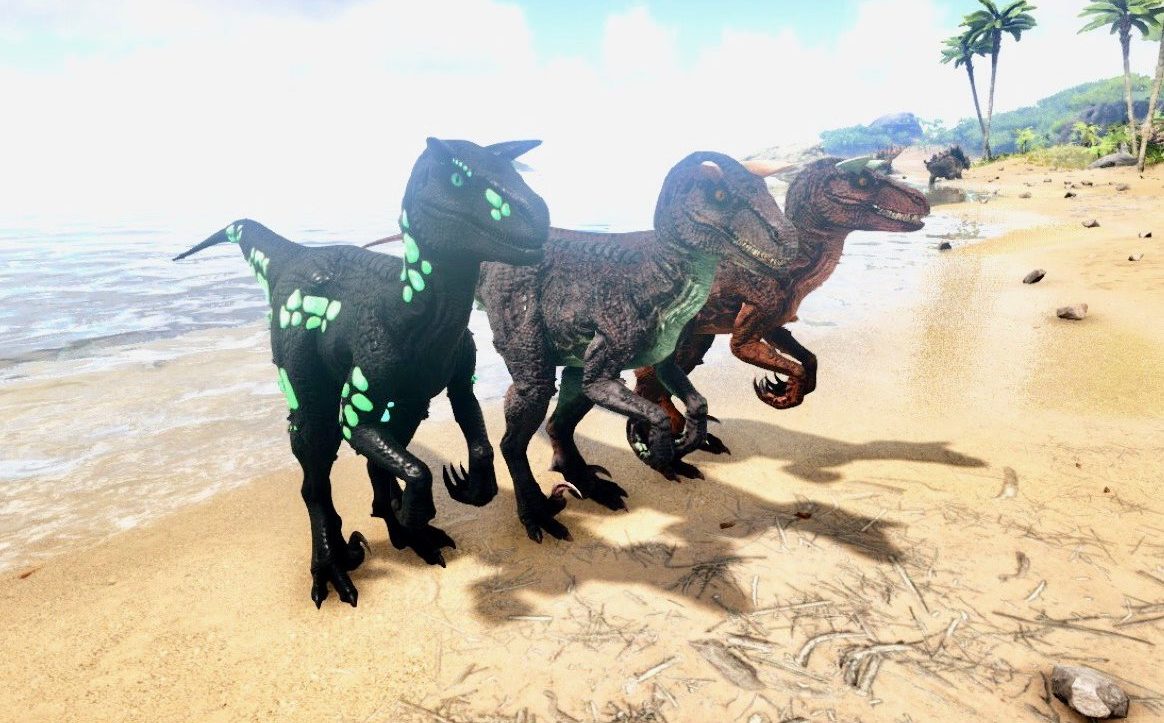 The Ankylodocus is a hybrid between a diplodocus and an ankylosaurus. It’s superior in harvesting metal and flint. However, since the DNA of the Doedicurus was used in the engineering process aswell, he is an excellent gatherer for stone. Thus you get a strong, speedy land dino that is well able to protect itself.
The Saddle comes with 2 Passenger Slots! Bring some friends! 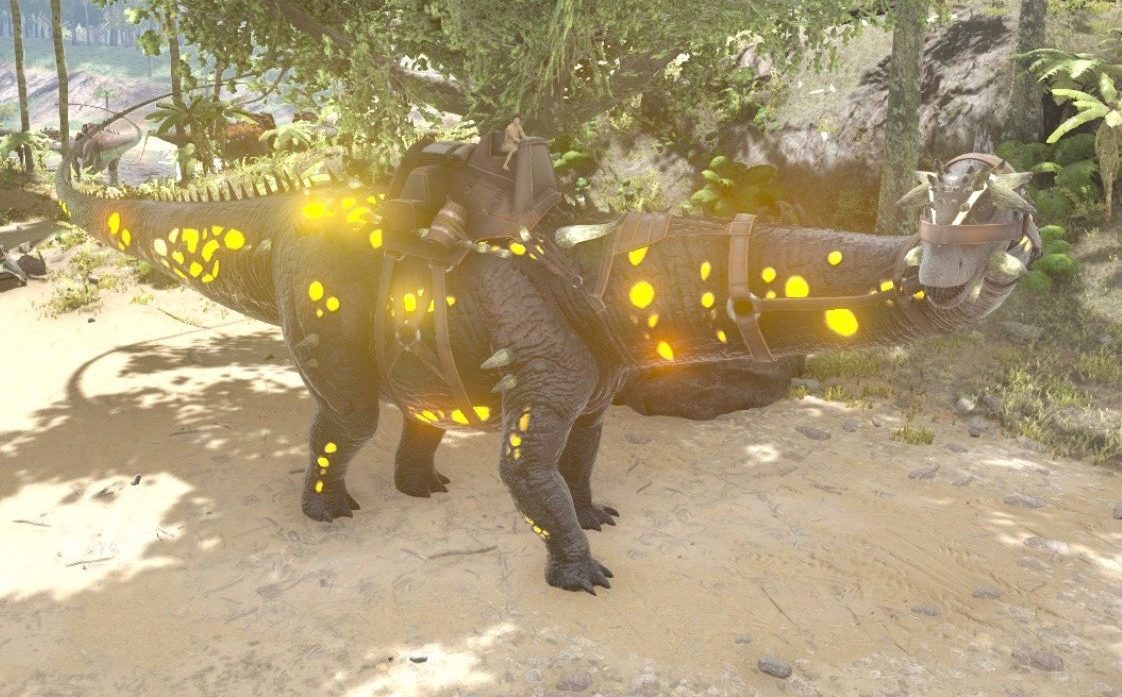 The Stegoceratops is the ultimate farmer. Due to its simple gene sequence, it is possible to combine the two DNAs without the use of element. Thus, it can be produced before the Tek Age and makes everyday life enormously easier. 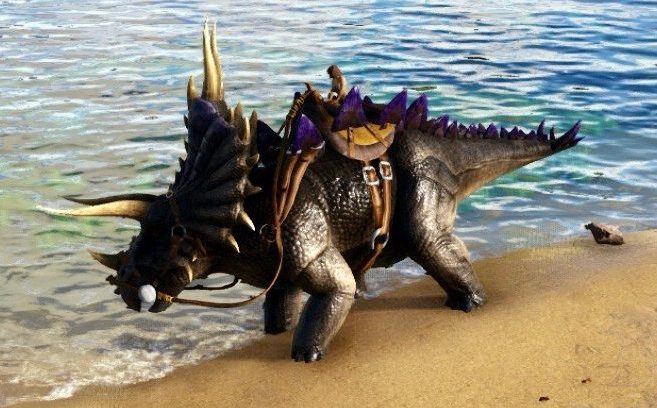 With the Kentrosaurusrex we have been able to successfully produce a combination of carnivores and herbivores through long genetic research, which can thus adapt to all adversities and feed on almost anything. The combination of the attacking power of the Tyrannosaurus Rex and the defensive behavior of the Kentrosaurus by damage reflection makes it an absolute all-rounder. In order to stabilize the gene combination the DNA of a Therri and a Stego is needed. 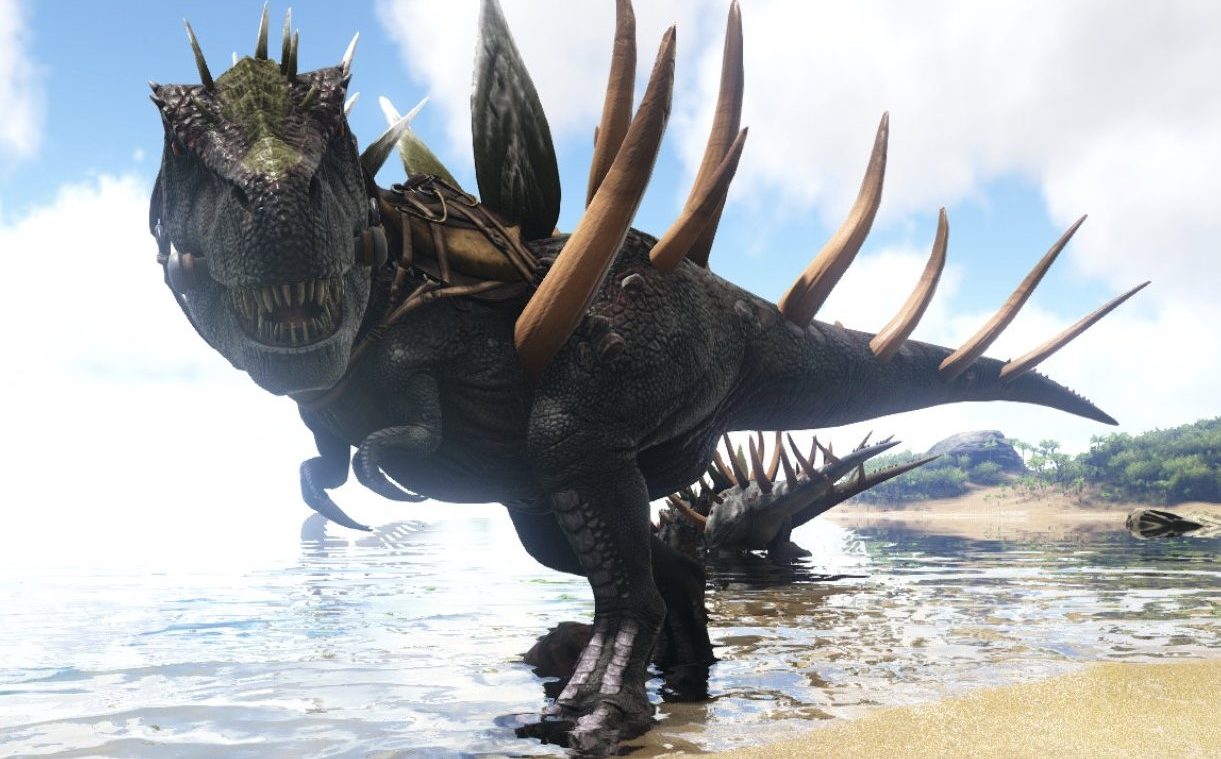 The Thorajara is a very unique hybrid. It was created from a DNA recombination of the Tapejara and the Thorny Dragon. Also, a little DNA of other dinosaurs has flowed in to fill in the gaps in the genome. So, a Flyer with special skills has been created. He is capable of shooting sharp thorns, both on the ground and in the air, thus inflicting enormous damage on his opponent. This damage is piercing and will ignore armor. His strength and energy are clearly superior to that of a Tapejara. 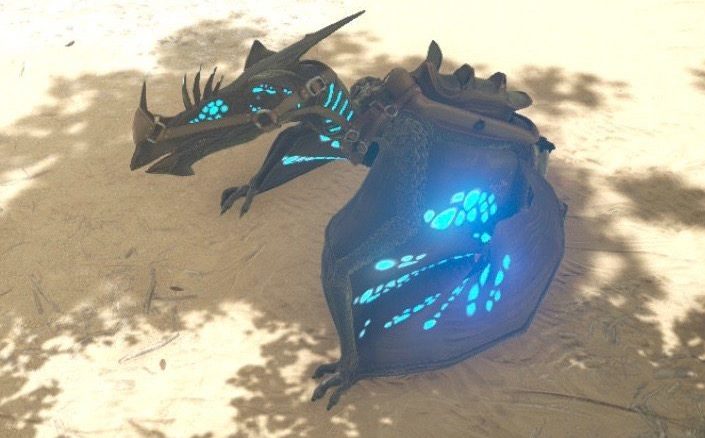 All the spawncodes you need!

Please Note: Due to the way how the Mod is created it is not possible to spawn in the Eggs, DNA or Blood directly!

These are all Hybrid Spawncodes.
COL = Colorful, AB = Aberrant, EXT = Extinction
Use admincheat gmsummon “Dinoname” 150 for a lvl 225 Hybrid

To spawn the Kurashi you can use this Code:
FireJumper_Character_BP

To spawn the Incendarius you can use this Code:
Ankylostega_Character_BP